Article Note: David Jenkins contacted me in the fall of 2021 looking for information on a trophy win of his from the early 1970's. The following is from our email exchange during the fall of 2021.

Andrea Bassan: David, I’ve always been curious about the origins of the Atlantic Provinces Trapshooting Association.

I won a couple of awards at the 2013 Grand American for High Canadian. These awards were donated by Harry Willsie. After doing some research, I discovered that Harry was the Quebec ATA Delegate and was helpful in getting the Atlantic Provinces recognized as an ATA Province. That was in the mid 60s I believe. Before that, shooters were listed as NS,  NB or Maritime Provinces. When Newfoundland shooters started competing, they were included under Maritime Provinces.

I’ve tried to find details on when the Atlantic Provinces Trapshooting Association was formed and recognized by the the ATA but I haven't been successful. The ATA wasn’t able to provide any information either. Would you have any information?

David Jenkins: When I started shooting in the 1950s the only thing that I was aware of was the Nova Scotia competitions.

As I had mentioned before my brother, James Jenkins, won the 1961 Nova Scotia Trap Singles Championship at the Captain Kidd Gun Club in Chester, NS. We weren’t aware of even a Nova Scotia Association, let alone any organized shoots or formal associations in the other provinces. At some of the Nova Scotia shoots in the 1950s and 1960s there were a couple of doctors from Saint John, NB, who mainly shot skeet. Other than that Harry Willsie and Barney Hartman were the only other non-NS shooters not counting the ammunition industry representatives. The only other shoot that was of concern here was the Canadian Skeet Championship, which was always held at the Montreal Gun Club. Sometimes some shooters from here would attend that shoot, my brother being one of them.

As my brother and I recall it ,Harry Willsie was also a skeet shooter. I met him a couple of times at the Dartmouth club. Harry was also president of the Canadian Skeet Shooting Association for a great many years - I remember contacting him about the time and place of the 1976 Canadian Olympic Skeet Shooting Trials, as he and the CSSA were the ones that set those parameters and ran those Trials. Harry won a number of medals in skeet, including gold, at numerous Pan America, Commonwealth, etc., international skeet shoots. As well he shot skeet at the Olympics at least once.

You’ve most probably heard of Barney Hartman, who has the highest average of all time in the world in American style skeet shooting. Contrary to what you might read elsewhere, Barney, as a member of the Canadian Air Force, started skeet shooting in the late 1940s at the Shearwater Air Base here in Dartmouth. To help pilots with their hand-eye coordination Shearwater had some skeet fields just off the runways (I remember seeing them) and it was here that Barney started shooting skeet. The first tournament that he won was at the now defunct Halifax Gun Club (on the west side of the old Halifax city).

Anyway, back in the 1940s, 1950s, and 1960s, and maybe part of the 1970s, the Provincial shoots and shooting records were all run and kept by the ammunition company representatives - the most prominent being C-I-L (Canadian Industries Limited). Stew Morrison, who grew up in Dartmouth, remembers his father (Dunc Morrison, C-I-L‘s Ammunition Rep. for this area) running the shoots and keeping the records from the 1940s into the 1950’s. Stew became a C-I-L rep. himself before becoming head of Ducks Unlimited Canada. There was no Nova Scotia or Maritime or Atlantic associations back then that I recall. In the 1960s and 1970s Winchester ammunition reps started to come around competing with C-I-L and C-I-L gave up keeping records and running the shoots. It was then that the associations started to appear. I think a Maritime Association started first, maybe in the late 1960s, and then the Atlantic Association in the 1970s.

Over the next week or so, David provided me with numerous newspaper clippings and additional info from his shooting memoirs dating back to the early 1970s, including a great article on his dad, Sid, shooting a 92 at the age of 92 at the 1996 Atlantic Provinces Trapshooting Championships in Moncton, NB.

Some familiar names and faces in this newspaper clipping from Atlantic Provinces Trapshooting Champions at the Dartmouth Trap and Skeet Club. 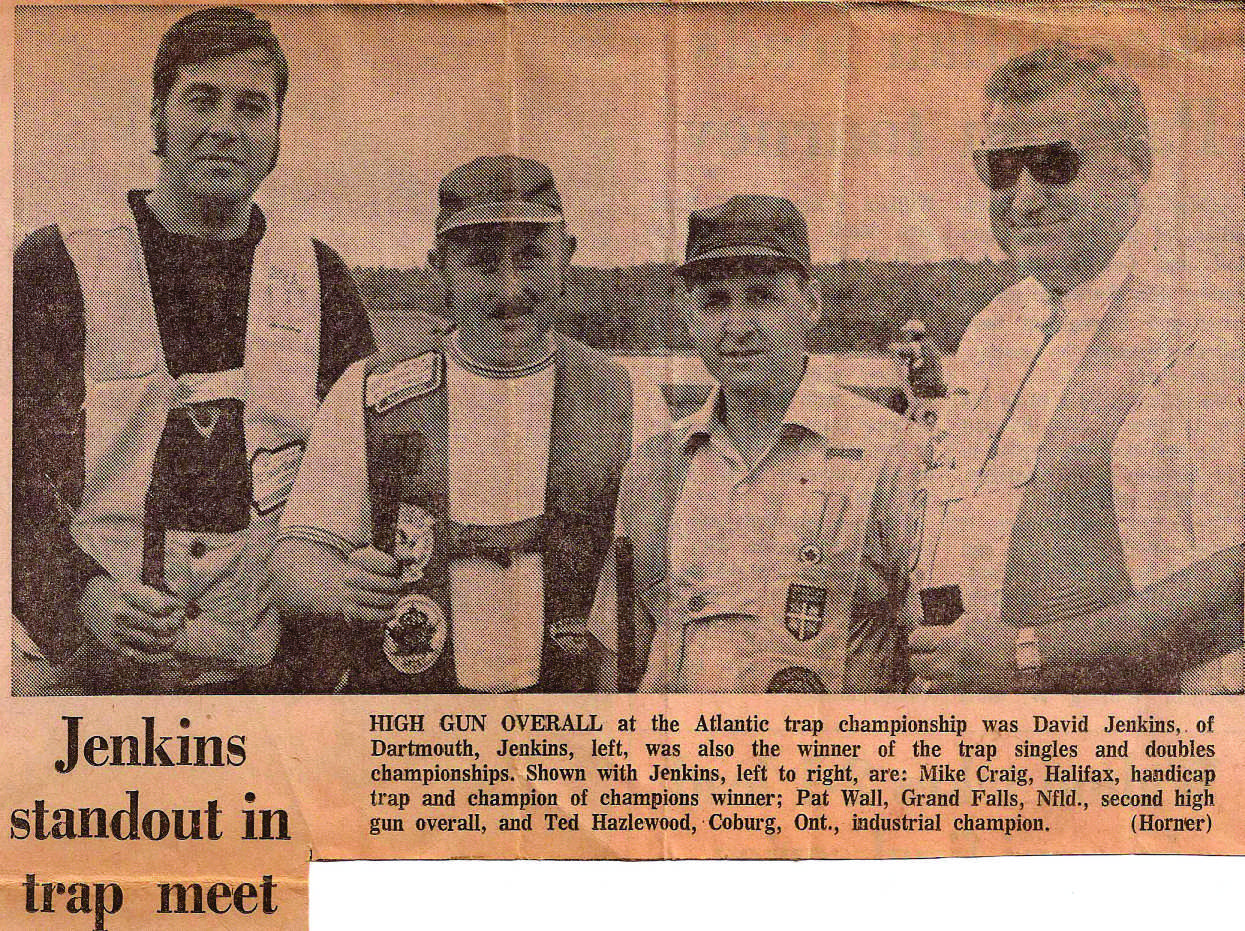 Here's David preparing for the 1976 Olympic Trap Trials in L'Acadie, Quebec. David reports that Susan Nattrass and John Primrose won the spots on the Canadian team. David reports that he got to shoot on a couple of squads with the 1972  and the 1976 gold medal winners.

David provided this photo from the Dartmouth Trap and Skeet Club, date unknown. At this shoot David and his father Sid were competing together. 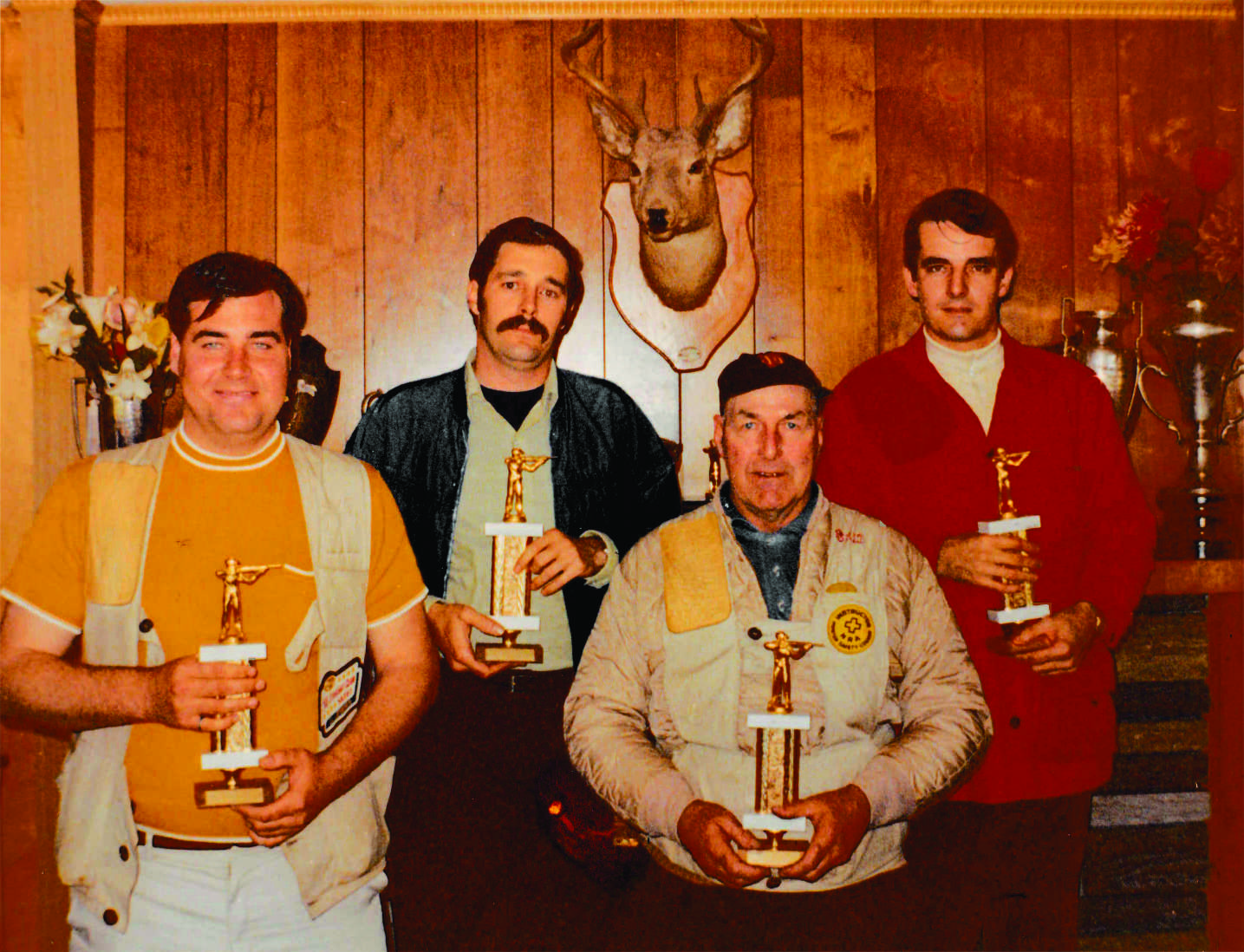 David also noted that Benfer and Williams were both American engineers working for South Eastern Commonwealth Drilling overseeing the construction of off-shore drilling rigs by the Halifax Shipyards.

Here's a nice newspaper article David provided of his father Sid Jenkins, shooting 92 in his 92 year, at the Atlantic Trap Championships held in Moncton in 1996 - he shot two 25 straights. That's good shooting!

My conversation with David, has reminded me of a motion that was made several years ago during our annual general meeting. The motion was to create an APTA Hall of Fame that should acknowledge the contribution that both Shooters and Contributors have made to trapshooting in the Atlantic Provinces. The APTA Hall of Fame hasn't been forgotten about, we just need someone, and possible a committee, to spearhead the idea. More to come on that in the near future.

I hope you have enjoyed this trip back to memory lane.