The St. John’s Rod and Gun Club located 30 km west of the capital city St. John’s (near the town of Holyrood, Newfoundland and Labrador) held the 2022 Atlantic Provinces ATA Provincial Shoot September 1-4. 2022. The club was founded in 1959 and offers trap. sporting clays, rifle, pistol and archery to it’s 1000 plus members. The club first hosted an Atlantic Provinces shoot in 1979. 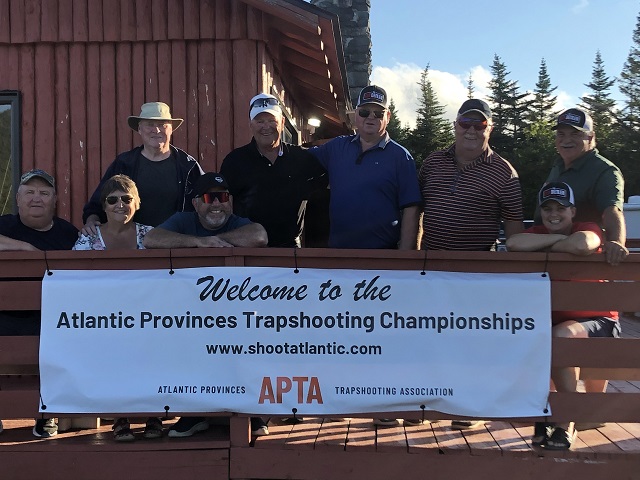 In 2019, the St. John’s Rod and Gun Club started a multi-year trap improvement project. The club has four well equipped trapfields, with Pat Traps and voice release systems on all fields, but there were some deficiencies and areas that could be improved upon. Major work items included rebuilding two traphouses, replacing the cracked, uneven and painted green concrete walkways on all trapfields, completing much needed landscaping work and new shooter benches. The project was partially funded by the ATA’s Gun Club Fund – an ATA funding program that awards grants to gun clubs through an application process for projects like the one the St. John’s Rod and Gun Club undertook. The club’s trapshooters provided the manpower and volunteered countless hours to complete the project. The ambitious project was completed in July and the 2022 Atlantic Provinces ATA Provincial Shoot would be the first large shoot since the completion of the project. 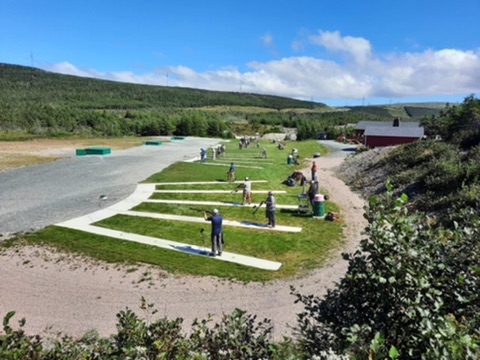 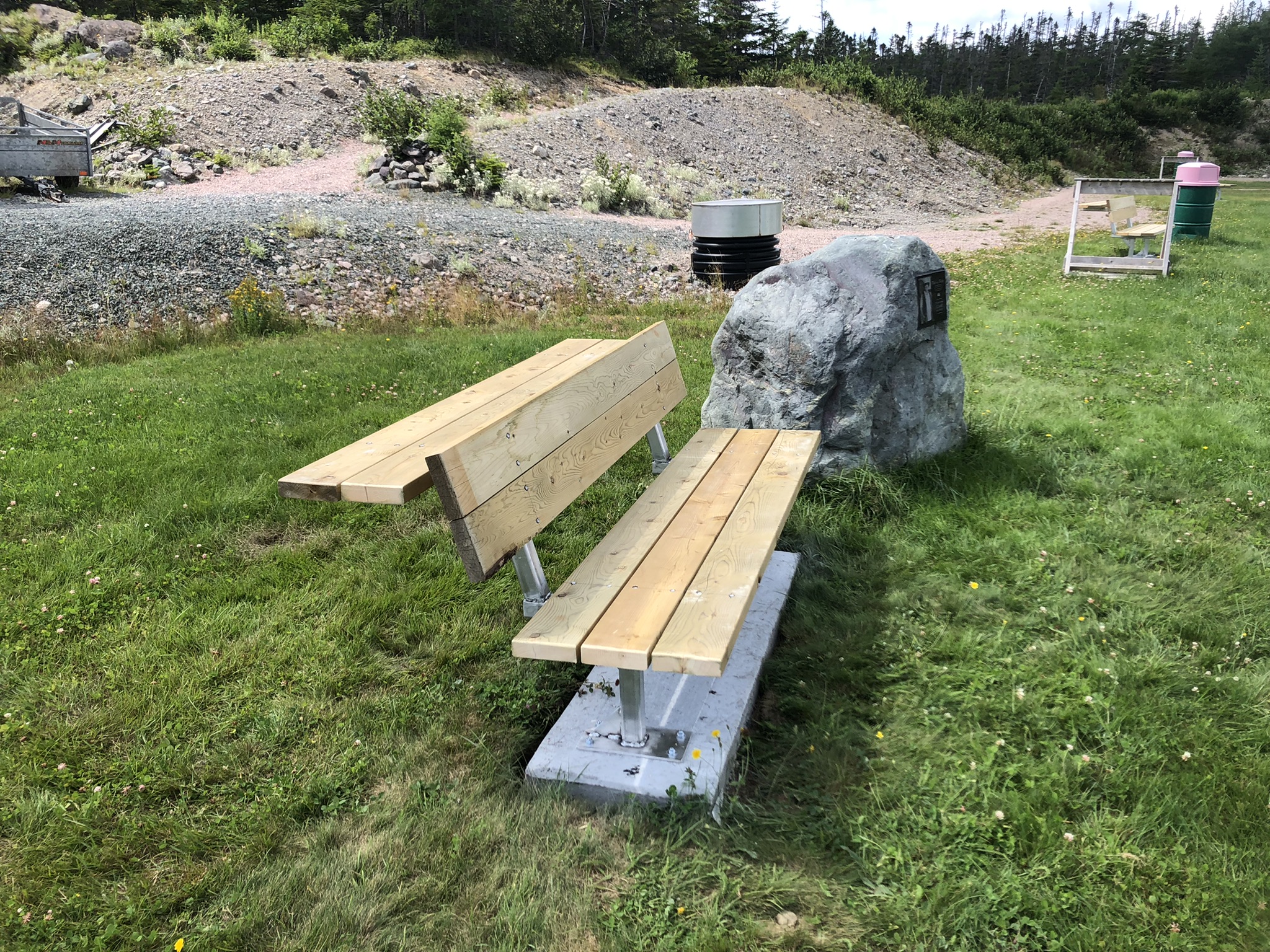 Maintaining well-kept grounds at the St. John’s Rod and Gun Club has become a big chore for the volunteer based club and the club’s push mower isn’t able to keep up with the expanding area of groomed grounds. The Atlantic Provinces Trapshooting Association (APTA) held a raffle during the shoot with proceeds going to help the club purchase a ride on mower. 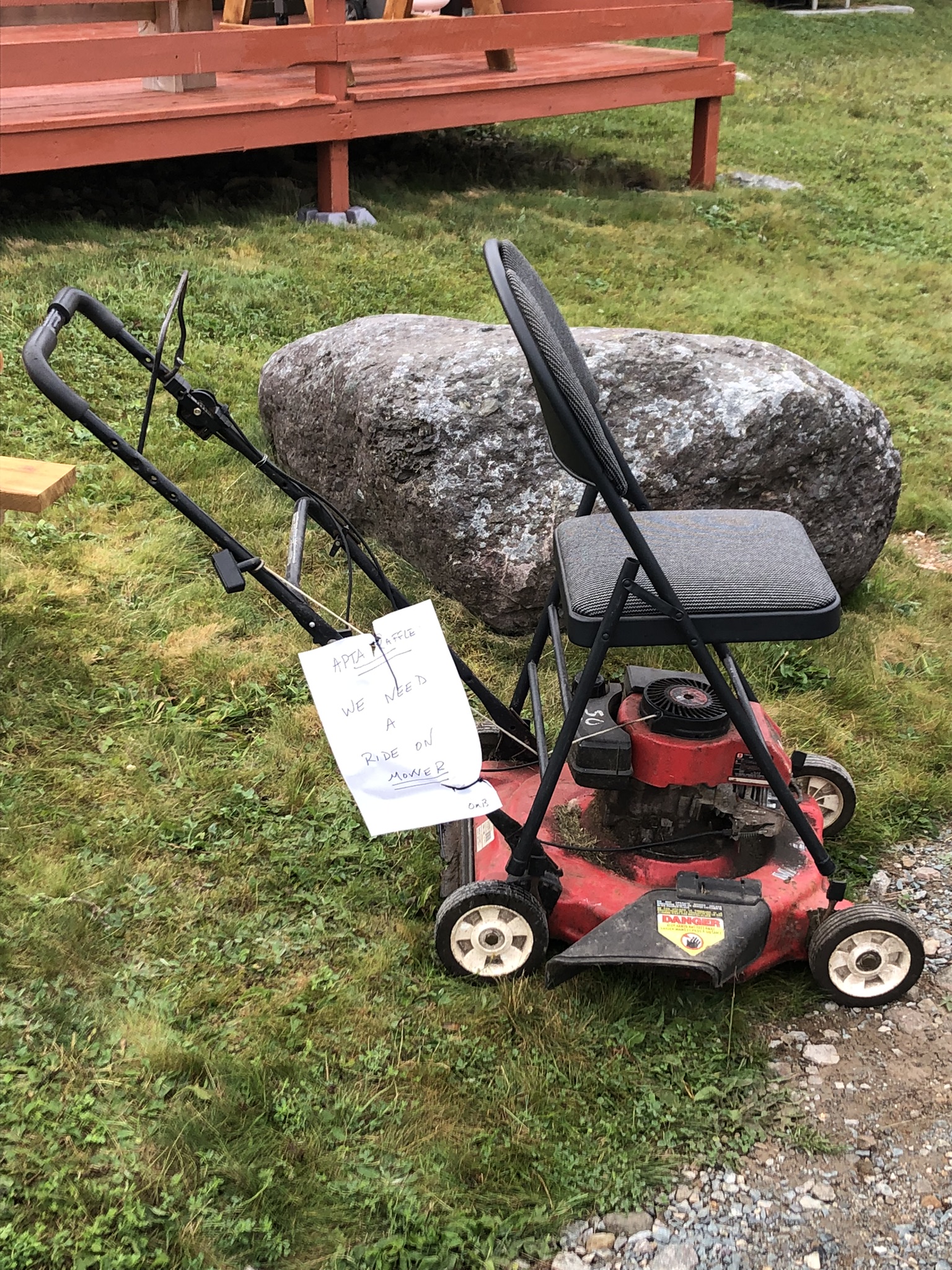 The raffle was a huge success thanks to the generosity of shoot sponsors and shooters in attendance.  Visiting Ontario shooter Bob Morphy won the top prize, a Fierce 12 gauge semi-auto, and donated it back to the APTA to raise even more funds. The APTA decided to have some fun with this second chance at the gun and sold tickets on a wobble trap five target shoot-off. Five tickets would be drawn and anyone having more than one ticket drawn could pick another shooter to shoot on their behalf. Reynold d’Entremont had two tickets drawn and chose Troy Coldwell as his shooter. Coldwell was the only shooter to go straight and won the gun for Reynold. 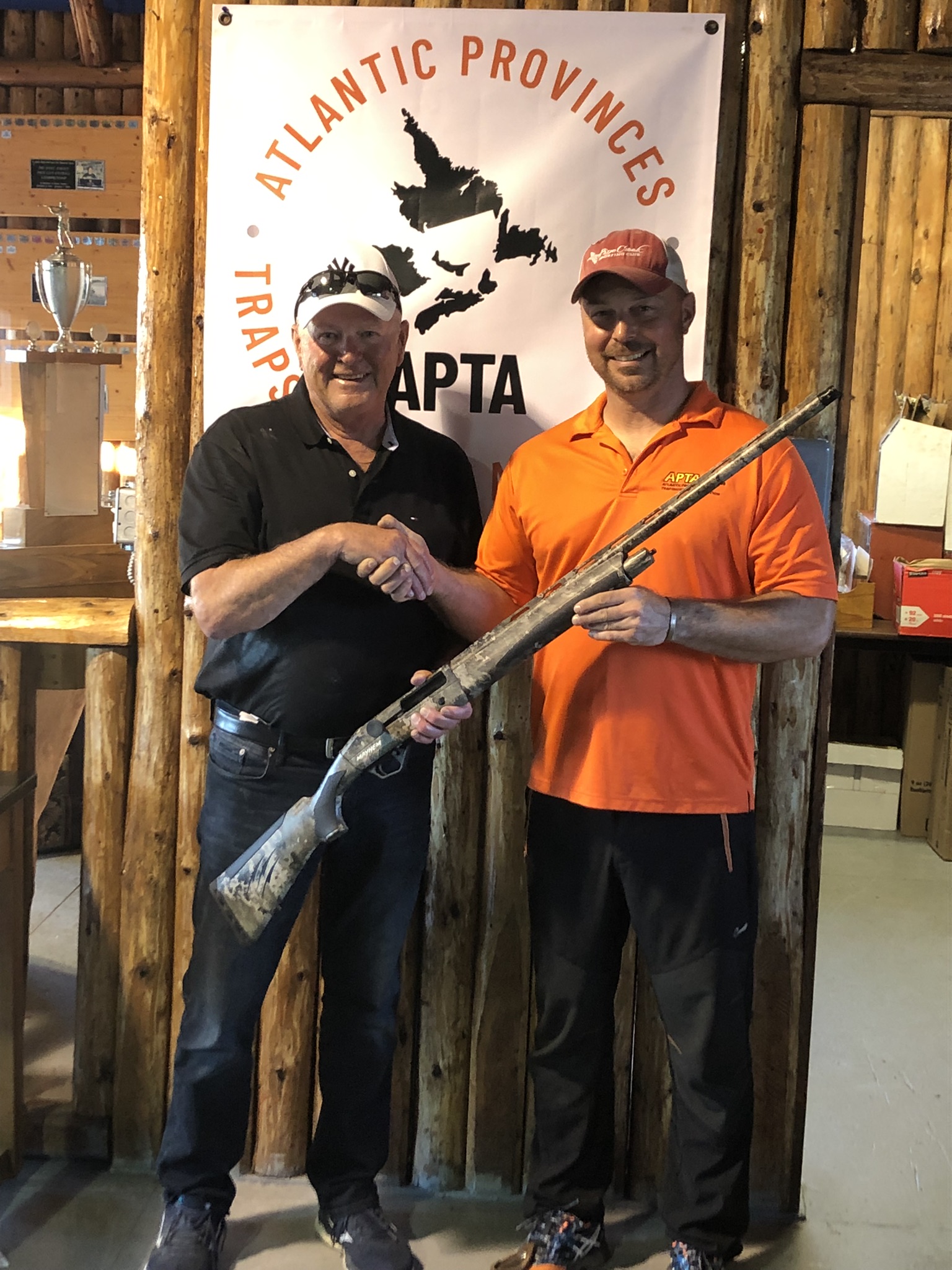 The raffle raised a total of $3500 and  club Trap Chairman Andrea Bassan thanked everyone for supporting the raffle. Shortly after the shoot, the St. John’s Rod and Gun Club ordered a Husqvarna zero turn ride on mower.

A Shooter’s Social and Banquet was held at the club Saturday evening. It was well attended and provided shooters with a chance to socialize and catch up. The APTA also used this as an opportunity to present awards for the Preliminary Day events and Singles Championship. 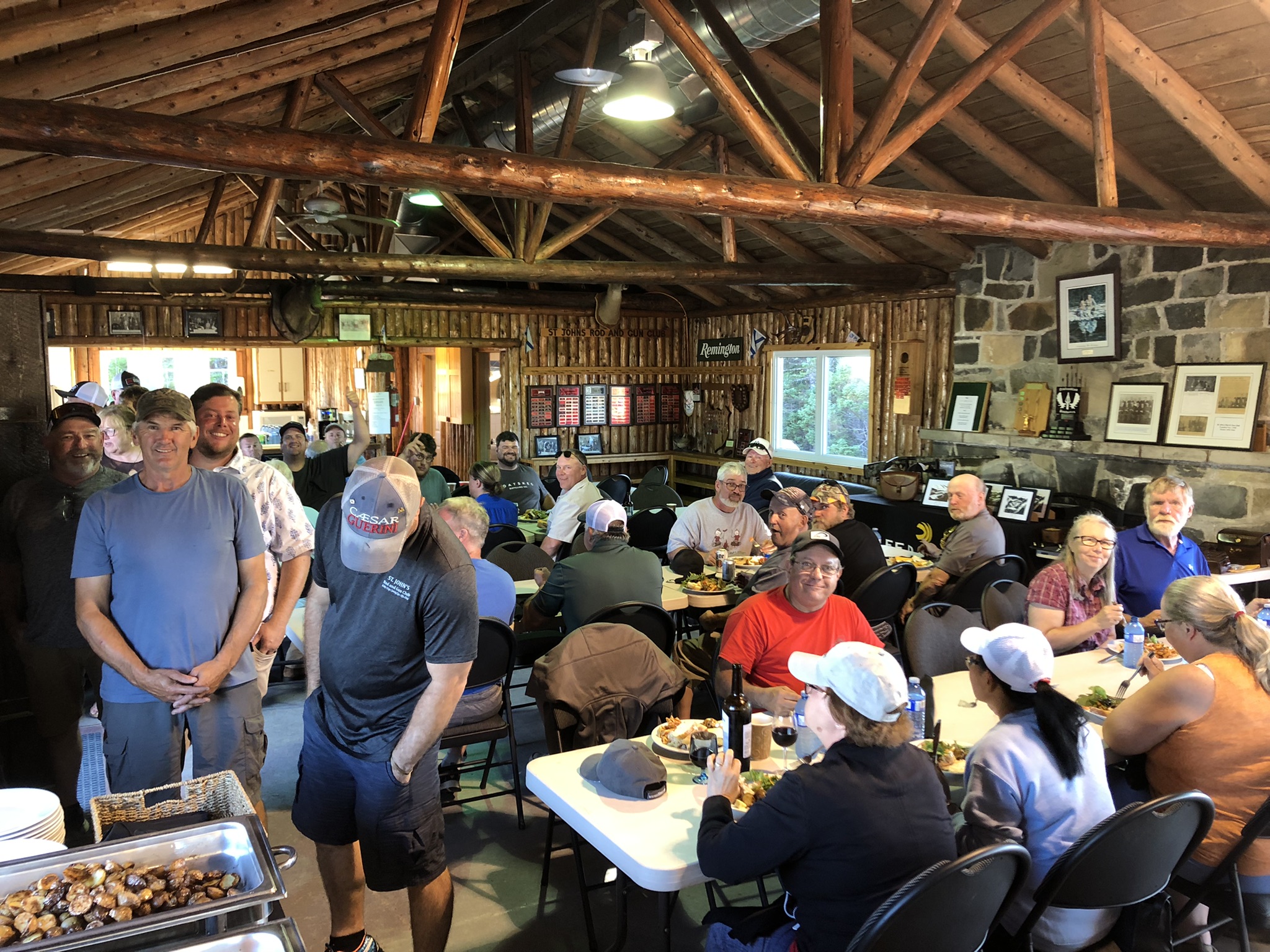 APTA members were given an update of what’s happening in the world of trapshooting during the annual general meeting. At the meeting, the APTA executive were voted in again for another term. APTA board members include:

To kick off the shoot, the club threw a Big 50 Shoot on Thursday, September 1. The registration desk was also open and most shooters took advantage of both. Club members John Tucker and Roger Butler prepared a fish stew for everyone in attendance and a bright blue sky provided great shooting conditions. Ronald Tilley had the high Handicap score and earned a ½ yard for his efforts. 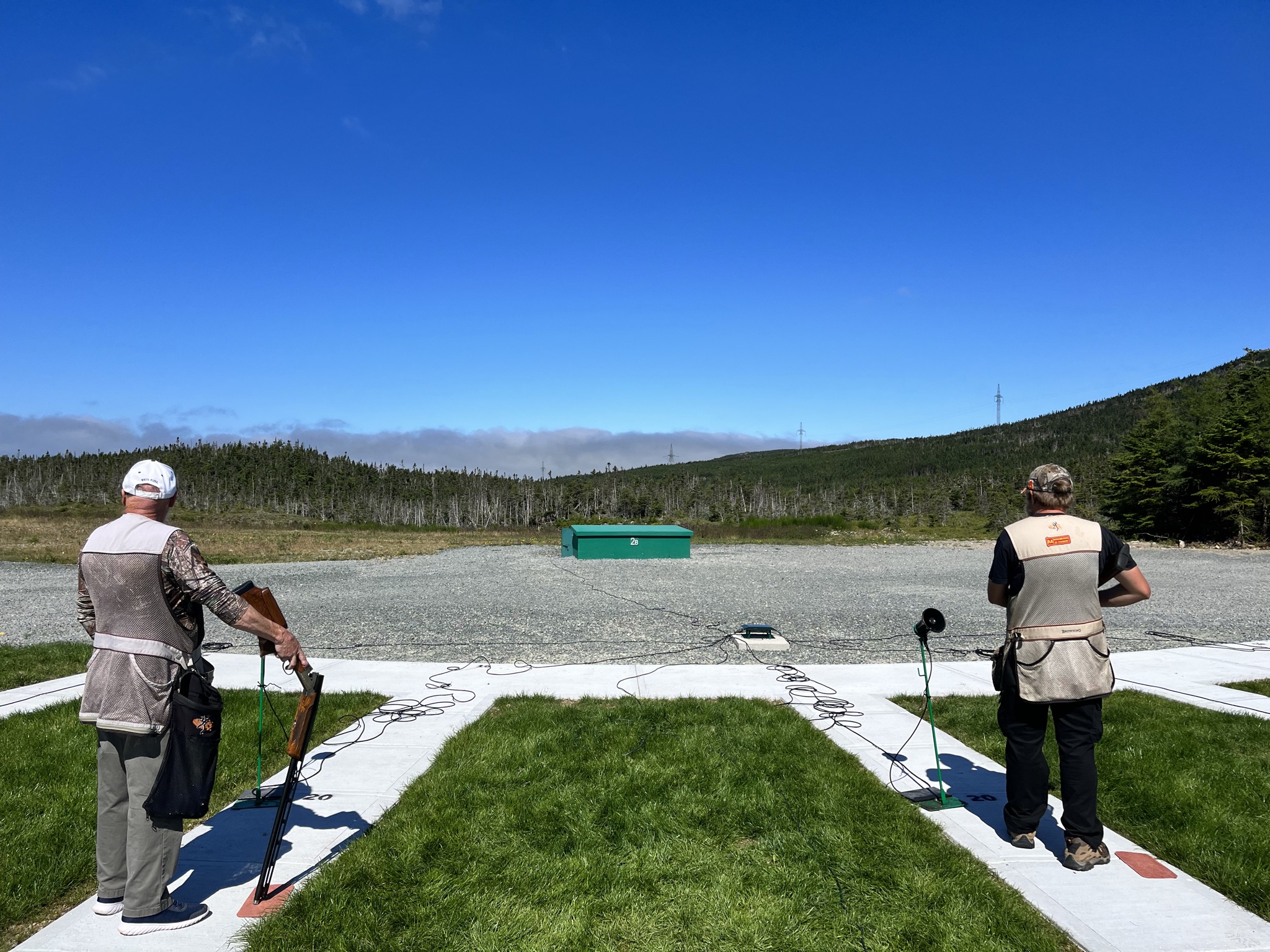 The weather forecast looked terrible for Friday’s Preliminary Day Shoot and shooters were bracing for a wet and windy day. Fortunately though, the heavy rain stopped just before 8 AM. A northerly wind kept shooters on their toes but overall it was a decent day for shooting. By midday, the skies cleared and blue skies returned. 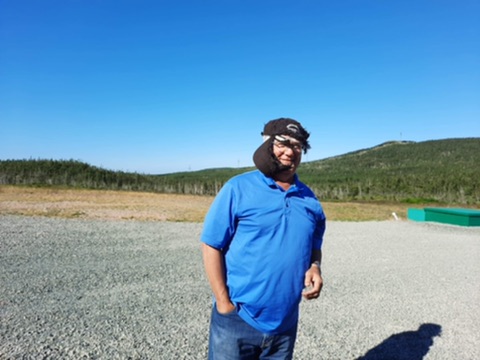 Alex Nickerson and Danny Boulet shot near perfect scores tieing with 99’s in the preliminary APTA Handicap event. Nickerson also shot his first 75 straight and a personal best score. Their shoot-off went two rounds with Nickerson (23/25) winning over Boulet (23/24). Both shooters earn one yard for their shooting. 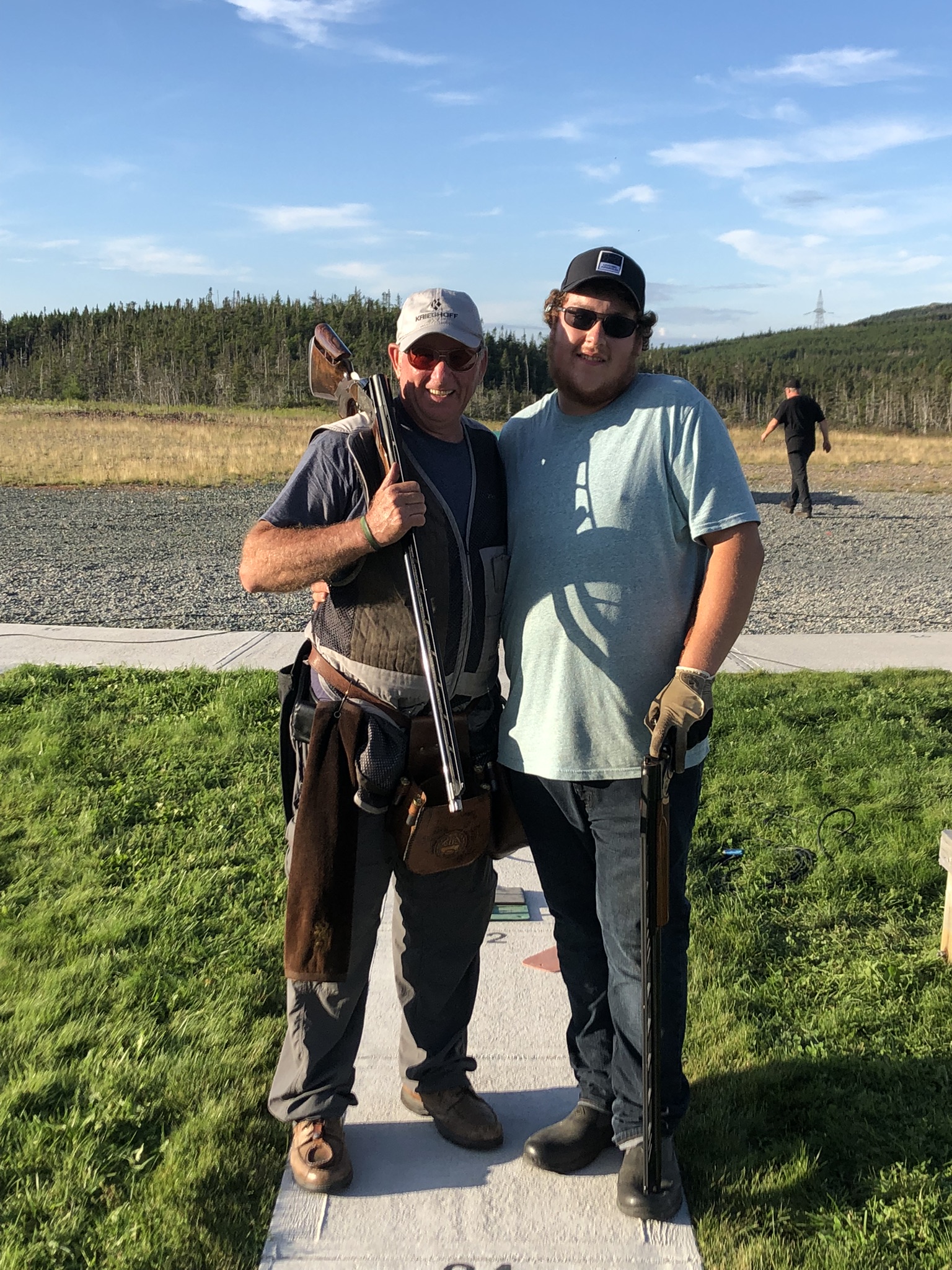 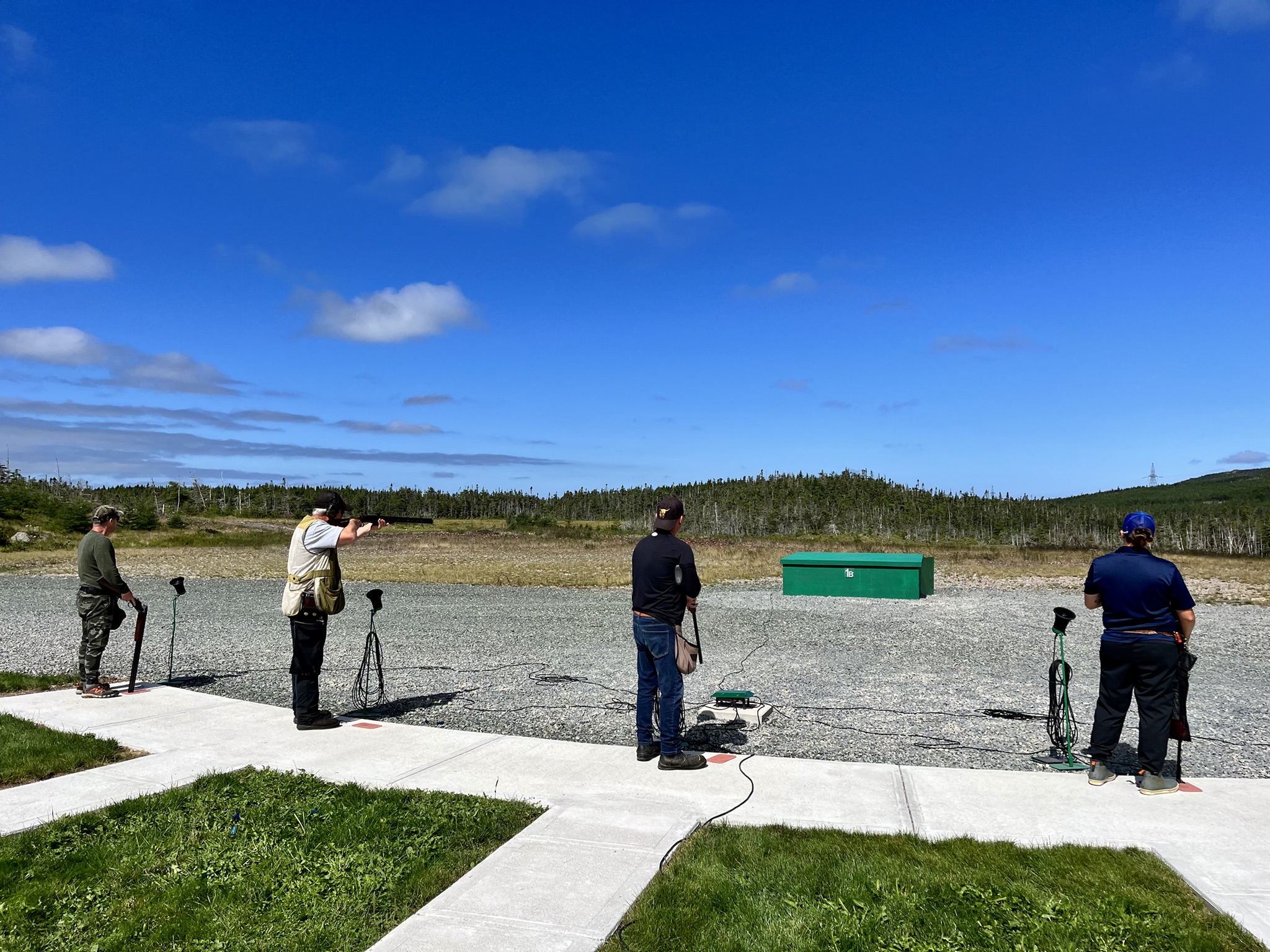 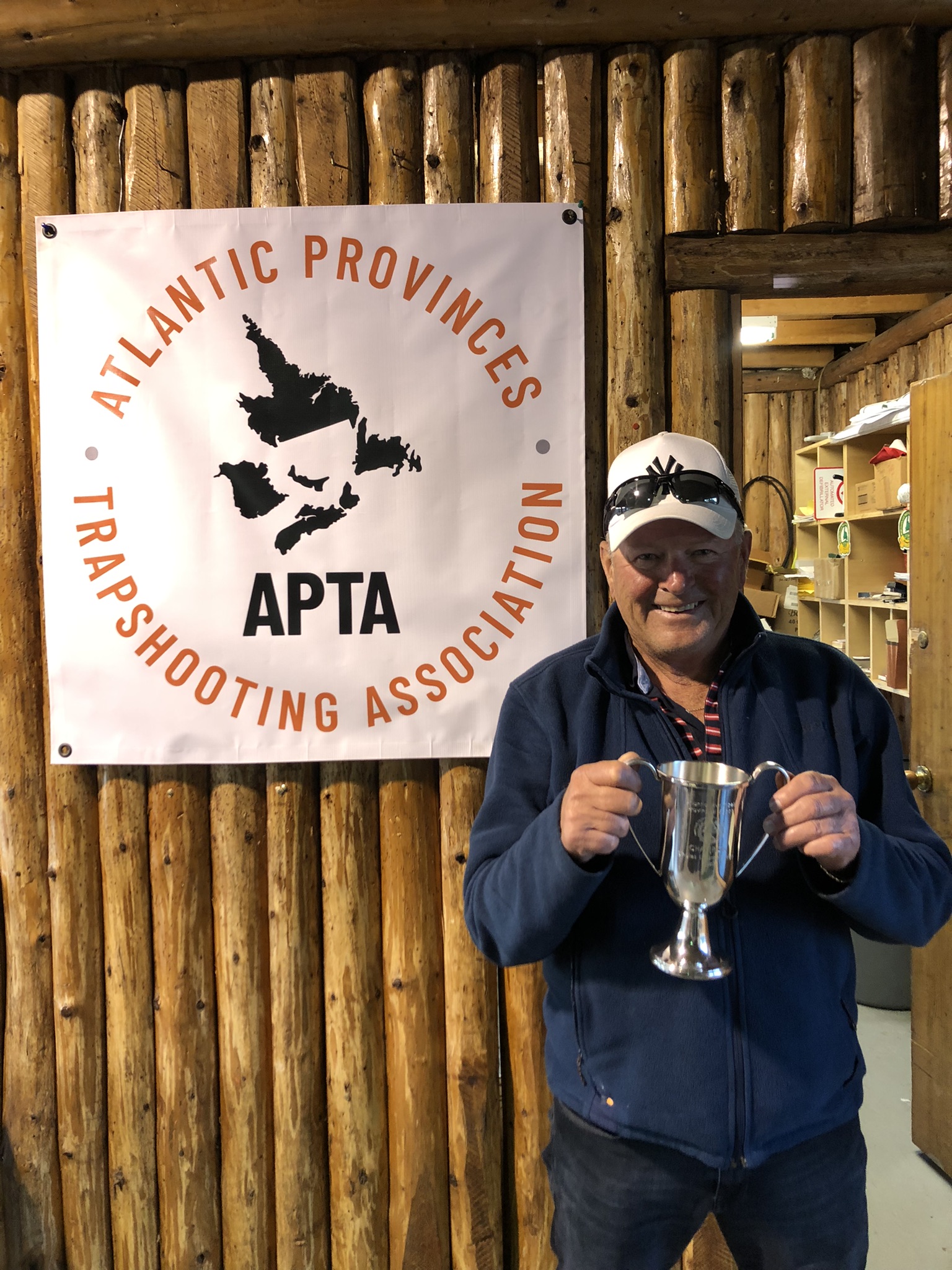 Joe Rosa was just one target behind and won his 3rd Singles Runner-up award with a 193. Ontario’s Bob Morphy won Open Champion with a 194.

In the Atlantic Provinces categories, Janaya Nickerson won Lady I, Aubrey Spinney won Sub Veteran and Lloyd Litwin won the Veteran award. Thomas (Tom) McGarry won Senior Veteran and Maddox Benoit won Junior. Tom has been an ATA member since 1986 and introduced his grandson Maddox Benoit to trap in 2020. Both are regulars at the St. John’s Rod and Gun Club. 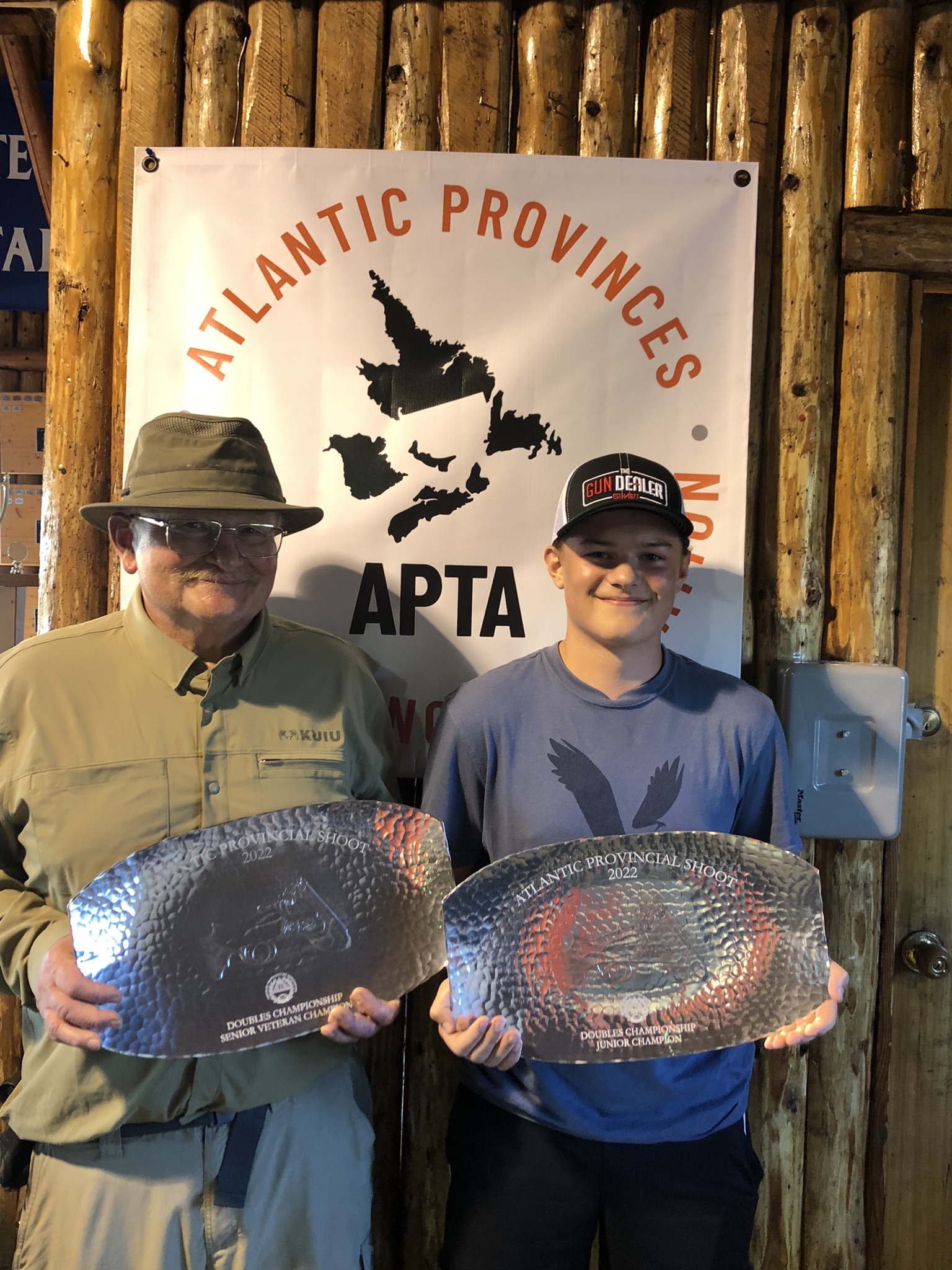 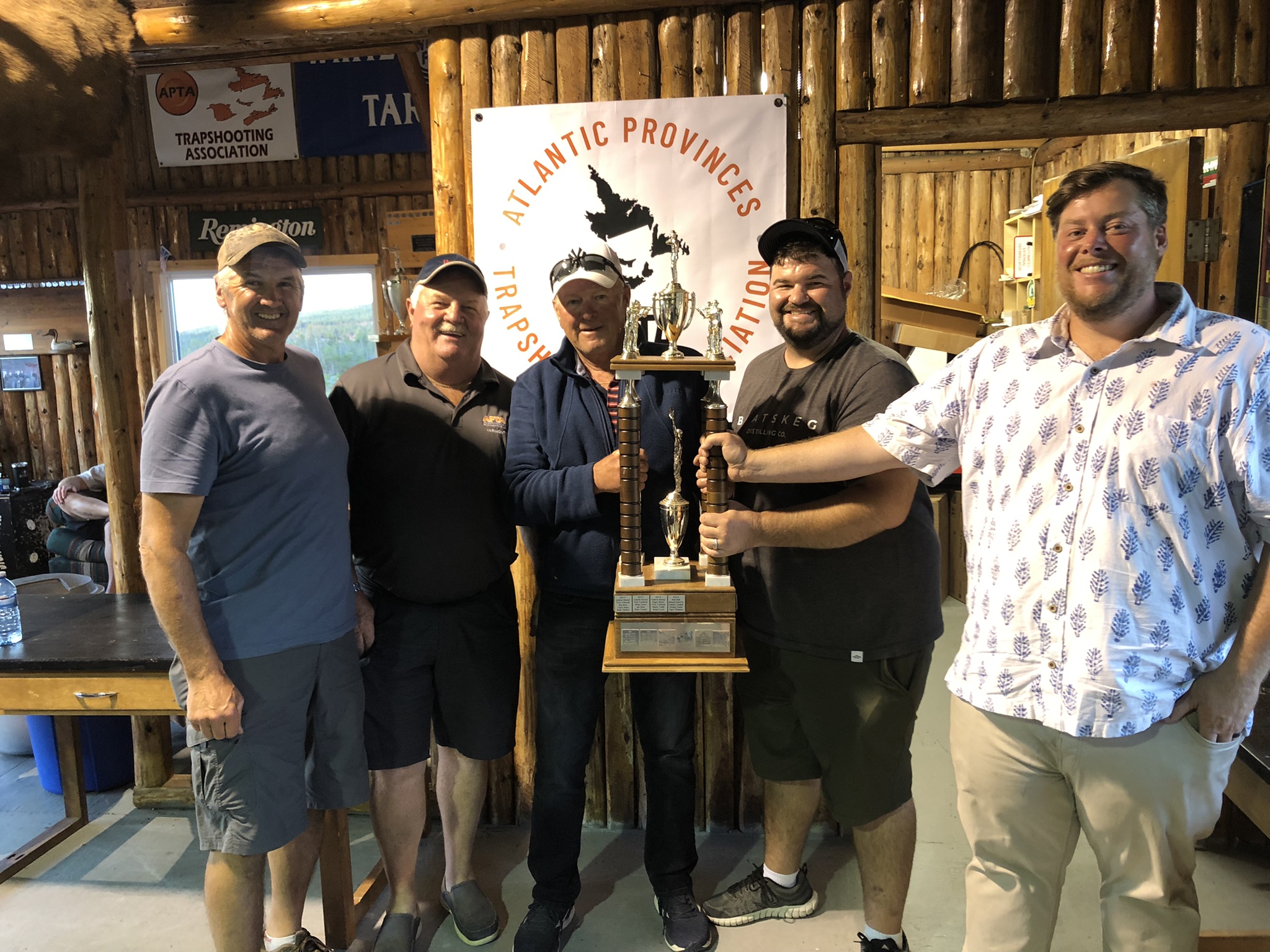 The Highland Gun Club won the Atlantic Provinces Club Points Championship competition with the St. John’s Rod and Gun Club. The friendly competition awards points to each club based on how their club shooters finish in each Class. Highest score gets 2 points, next score gets 1 point and the loosing club has the honour of displaying the trophy at their club until the next shoot.

Highland Gun Club team rep Ken d’Eon presented Andrea Bassan of the St. John’s Rod and Gun Club the trophy. It was rumored that Kenny was nervous about this year’s competition and was relieved when the final points were announced. 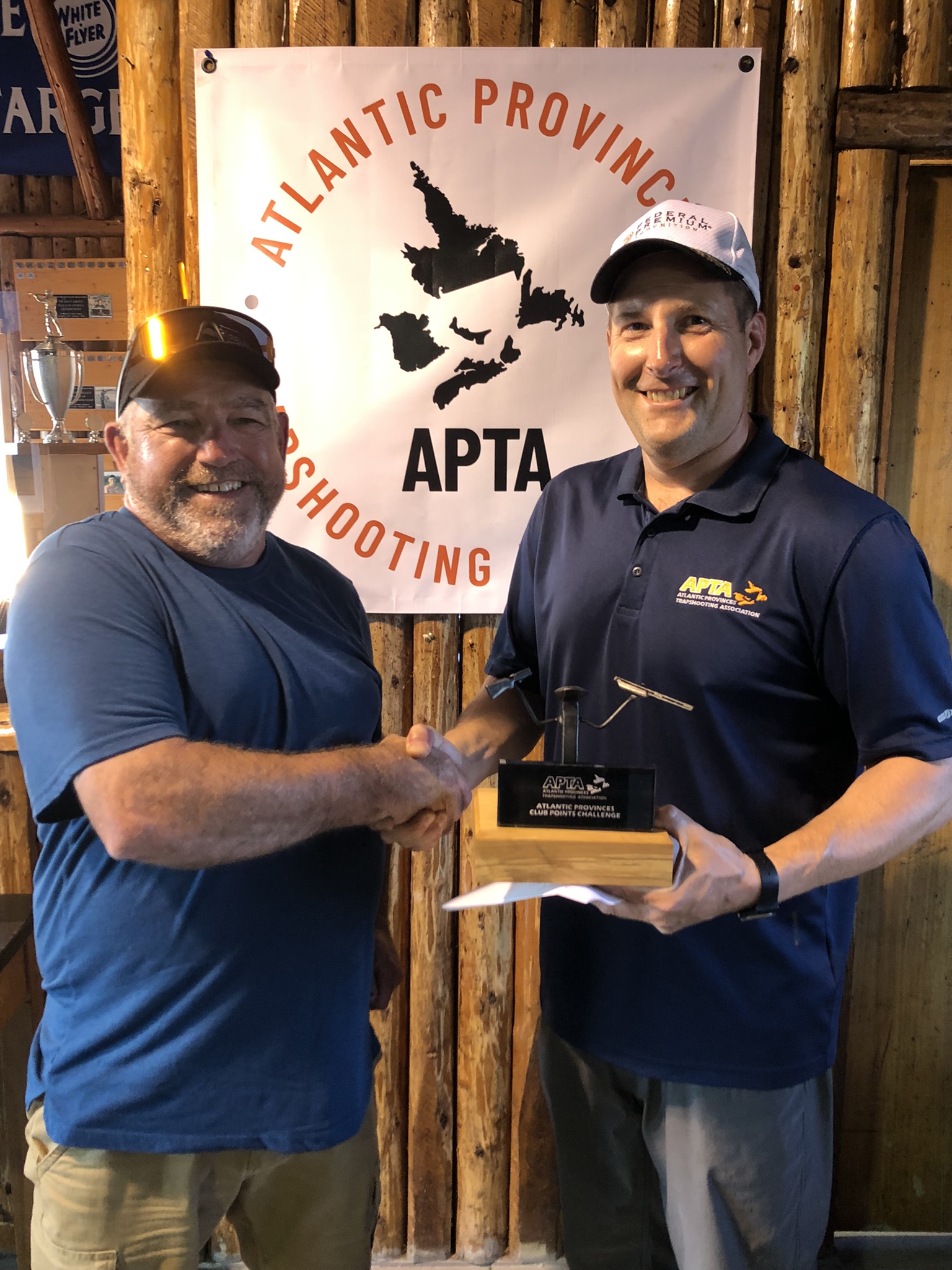 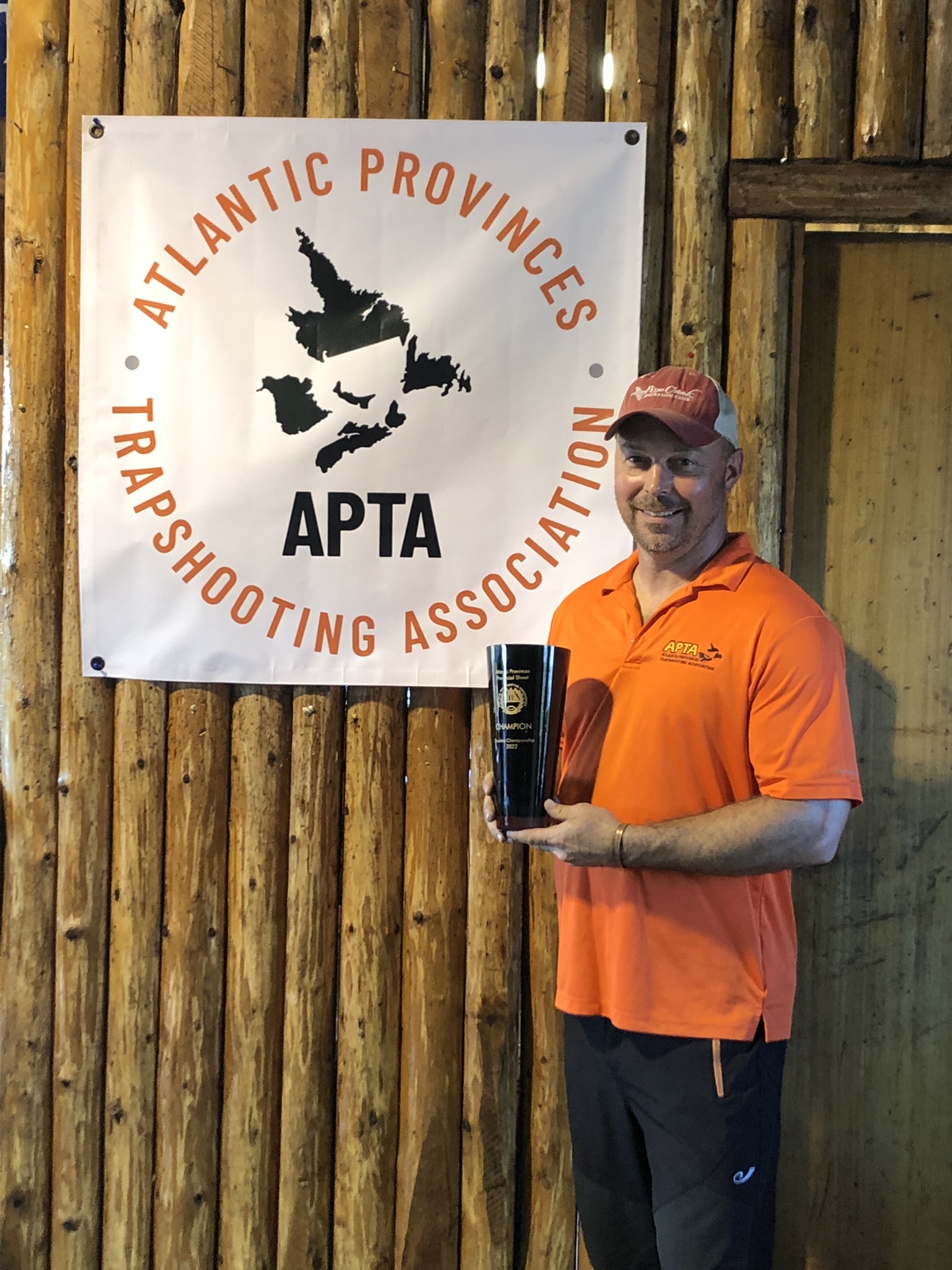 Joe Rosa won his 4th Doubles Runner-up award. Andrea Bassan, Larry Rosa, Davis Atwood and Clyde d’Entremont won A through D Classes. Coldwell and Rosa were the only AA shooters so there was no declared AA winner.

In the Atlantic Provinces categories, father and daughter shooters Herbie and Janaya Nickerson win Sub Veteran and Lady I awards. 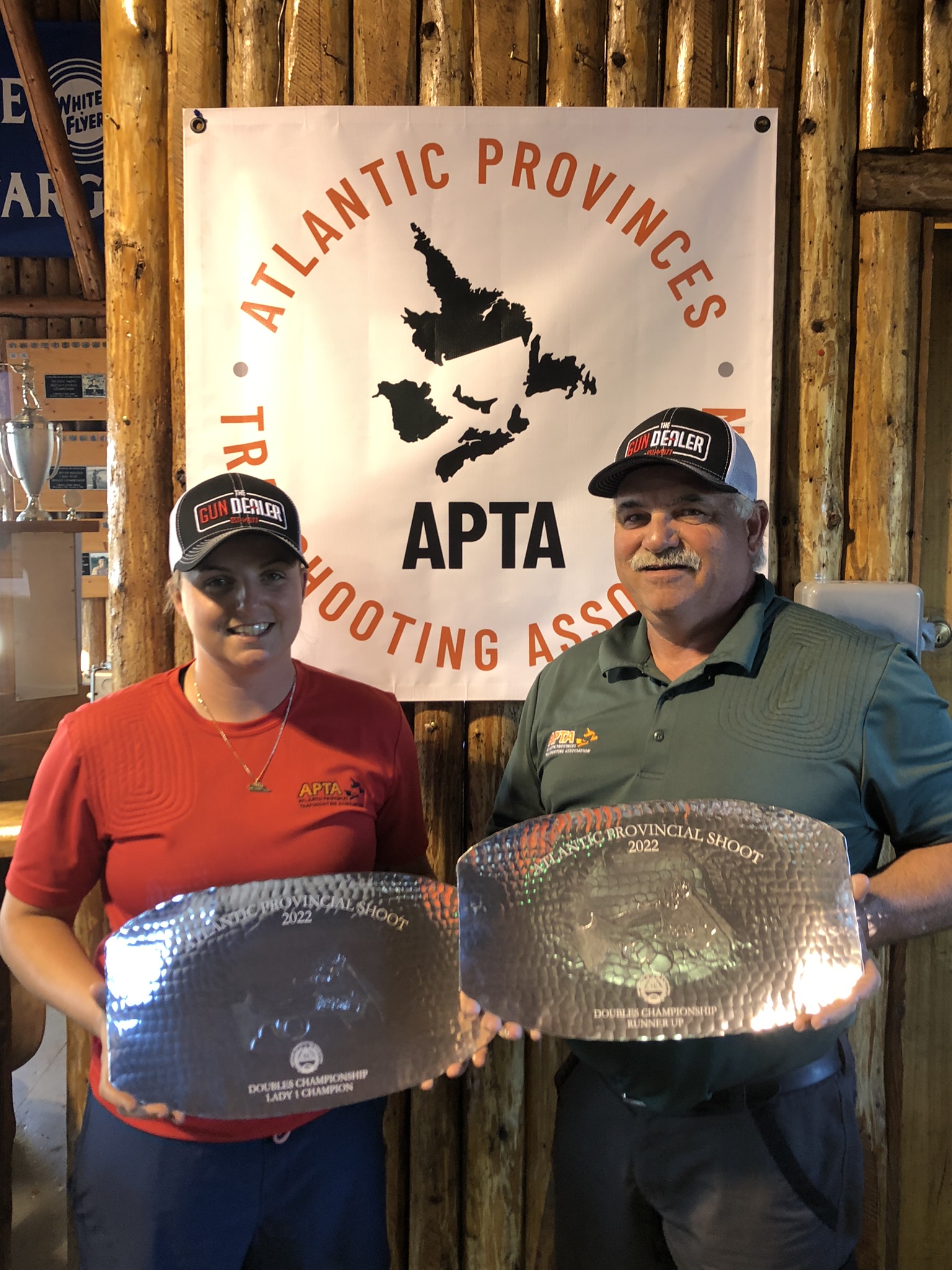 In the Open awards, Rejean d’Entremont won Champion and in the Classes Bob Morphy, Doug Blades, Gary Nickerson and Danny Boulet win A through D. 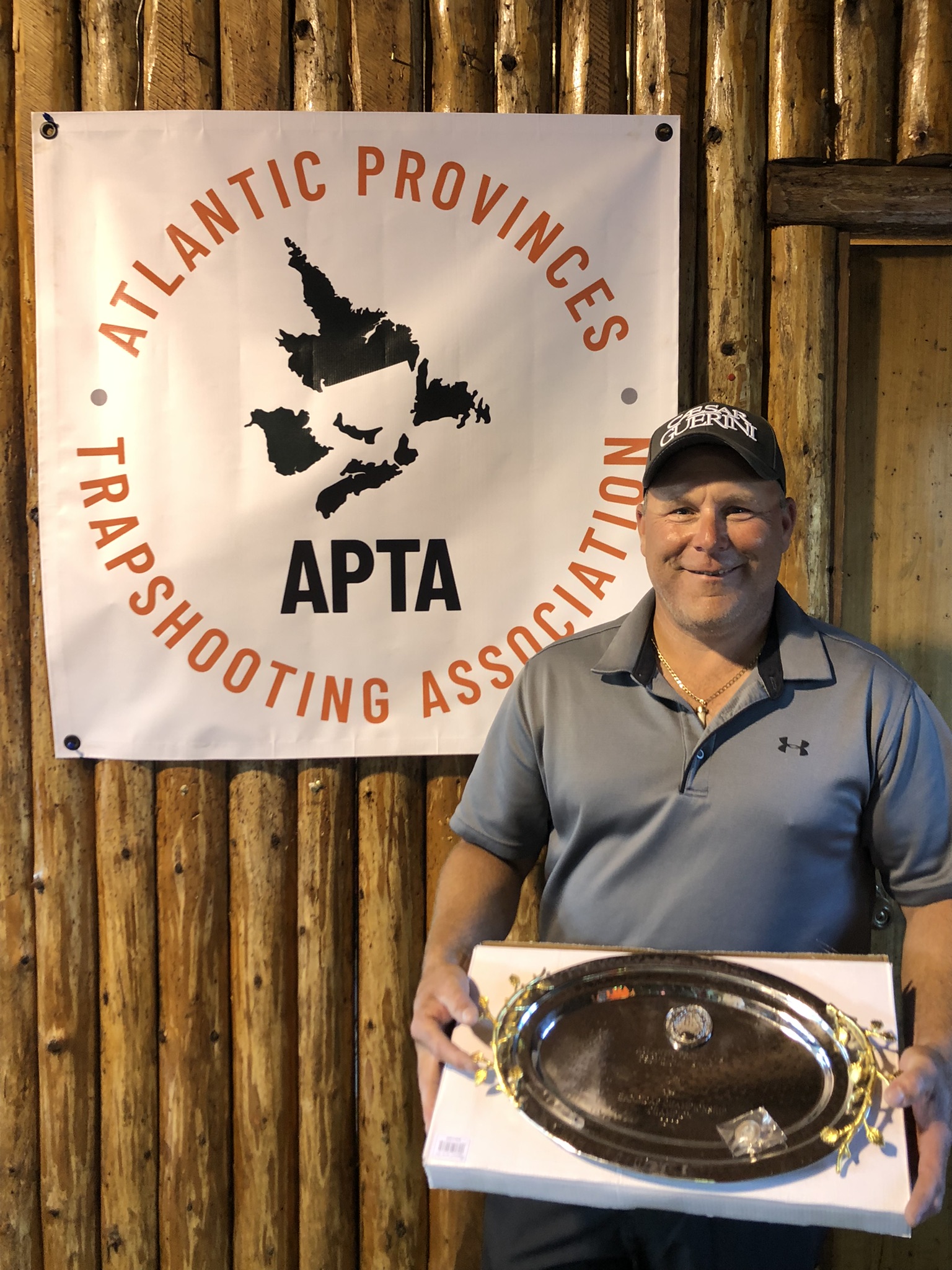 The shoot-offs continue in to the High All Around (HAA) and High Over All (HOA) competitions. 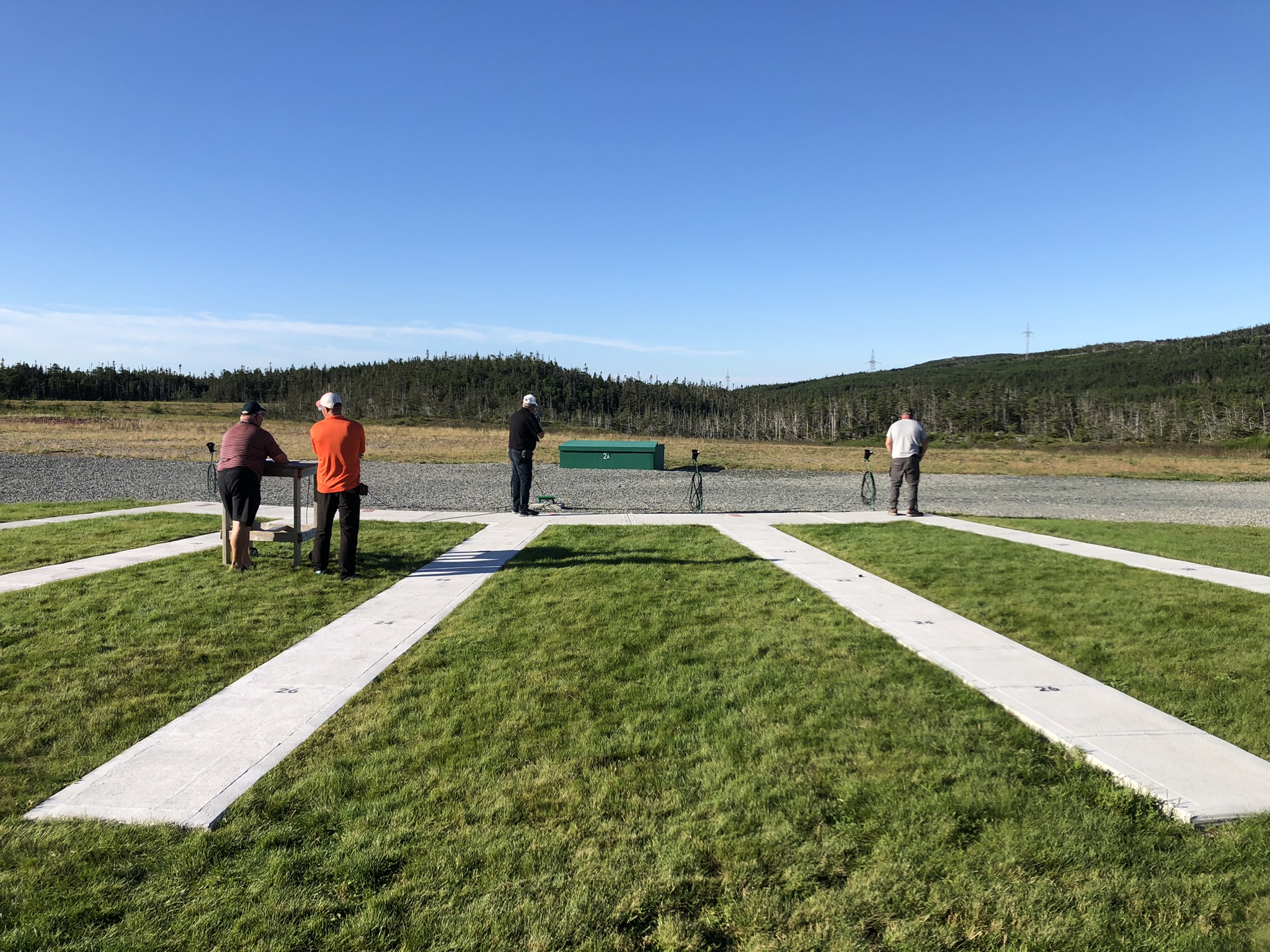 Joe Rosa and Davis Atwood tie for the HAA. In the 20 Singles, 10 Handicap and 5 pair of Doubles shoot-off, Rosa out shoots Atwood by 3 targets to win the Atlantic Provinces HAA. Davis wins Open HAA.

In the HOA Troy Coldwell won the Atlantic Provinces HOA by one target over Reynold d’Entremont and Joe Rosa. In the shoot-off for HOA Open, Reynold out shoots Rosa by one target to claim HOA Open. This shoot-off was Joe Rosa’s third of the day.

The 2023 Atlantic Provinces ATA Provincial Shoot will return to the Highland Gun Club in Yarmouth, Nova Scotia August 31 to September 3, 2023. Stay tuned to our website for details.

Thanks to everyone that helped make this year's shoot a success. See you next year in Yarmouth. 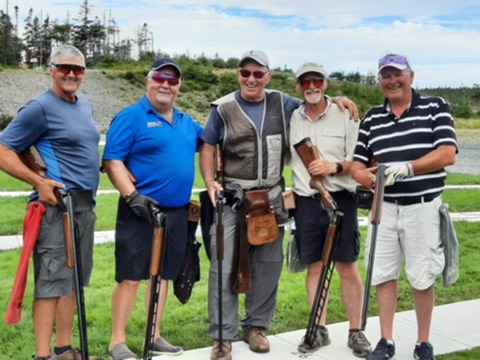